I have managed to collect a ton of CD-ROMs. And diskettes. And two flashdrives. And no, Google, I don’t delete emails, I just leave them in my mailbox so you can data mine them. I have at least two email accounts that have gone dormant. Maybe I should check that earthlink account. . .

One thing that I don’t have, alas, is any of the disks for Mystery House. One of the things that I was inspired to do after reading Kirschenbaum’s Mechanisms is to try to read the mechanism of my old disk for Mystery House. I remember playing the game over at Greg Donohoe’s house, and solving the mystery. It seems that people who like games like this also tended to like Choose Your Own Adventure Books. We also liked Trixie Belden over Nancy Drew.

I wanted to play along with Kirschenbaum: I wanted to find the crack screen so that I could see what else was on the disk. Alas. No diskette was to be found, and so I went to the FTP server that Kirschenbaum used to get a disk image of Mystery House at ftp://ftp.apple.asimov.net. I wanted to see if I could access any disk image at all there. I downloaded an ftp of a game that I recognized because Mystery House wasn’t there. Bang. A problem. I needed to download an emulator so that I could emulate an Apple II on my MacBook Pro. I found one at http://www.virtualii.com/. I also found Mystery House at another apple ][ site that had some cool stuff, like an apple ][ for sale (ah, yeah), and downloaded that. Then, I chickened out.

A lot about computing for somebody like me is not chickening out. Sometimes it’s easy to get lost in the process. Sometimes, it’s like reading Greek. Sometimes my contact lenses fog up and I can’t see. All that happened. And I chickened out. So now I have an emulator, an disk image of Mind Castle, and only a blog post to show for it. YOU ARE IN A STORAGE ROOM.

Then, I struck a little bit of blogging gold. I wanted to find what others were doing with classic games. I found this interesting little site where a review was posted of Mystery House. Here are some screen shots (click on them to read them; it’s enlightening): 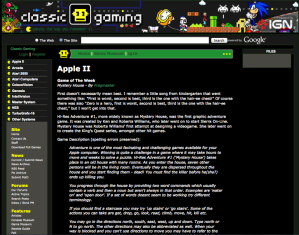 The most interesting and telling thing that the reviewer, fragmaster says is:

Mystery House is basically a sub-standard text adventure with simple graphics. The graphics consist of (sorta) black and white lines and look like something a ten year old would create in MS Paint. The command system doesn’t match Infocom’s, and neither does the writing. It just isn’t a very good game. When compared to Zork, which was also released in 1980, it just doesn’t compare. The plot of Mystery House involves the search for jewels in an old house, with a lot of dead people thrown in for good measure. It’s somewhat of a predecessor to The Colonel’s Bequest and other later Roberta Williams mystery games.

I would hate to think that this review was written by either Martin Scott Goldberg or James Hunt, who are the staffers on classicgaming.com, because it reads like a review written by some zitty youth living in his parents’ basement sucking down Mountain Dew and eating RedVines like they’re going out of style, and not some Gen Xers who have actually tried to get classic gaming into the hands of people too young to enjoy games created at the moment of personal home computing.

The review is a really great example of what Kirschenbaum makes of Jerome McGann’s bibliotextual interpretation, but only part of it, the formal materiality of the computer program. Formally, from an eye unused to examining a game or a disk as a mechanism, the game as experienced by an end user is “just not a good game.” The graphics suck. The directions are tedious and long and hard to read. The mystery is easy to crack. It’s a choose your own adventure book that is not worth a re-read. Kirschenbaum agrees: “Solving the murder is not hard, and the game offers no replay value” (129).

Textually, the disk image is much, much more interesting. As a forensic text, Mystery House would be a “trophy. . .a multivalent forensic environment, one where all these different levels of engagement — player, pirate/cracker, postmortem investigator — find their correspondences in the multiple layers of textual events that both drive the game as code and are explicitly thematized within its forensically charged spaces” (129). I would hate to think that classic gamers such as Goldberg and Hunt are not thinking of the code that hides behind the game in the disk image. The mechanics of the game are much more interesting than finding a note saying, VALUABLE JEWELS ARE HIDDEN IN THIS HOUSE. FINDERS KEEPERS. The valuable jewels are the code and all that the code can teach about the history of computer gaming and the mechanism of a disk operating system.

Kirschenbaum points out the following about the graphics. “The graphics for Mystery House were created with a Versa-Writer, a primitive CAD tablet that worked by tracing a stylus (mounted on a mechanical armature) over a line drawing. The software then plotted a vector image that corresponded to the drawn art. . .Perhaps Roberta Williams felt the allure of the machine ‘reading’ her writing” (132). For Goldenberg and Hunt, who I desperately hope are not fragmaster, the question is not whether or not the graphics are good, but how Williams created them, writing with a stylus on a tablet, something that was quite advanced and novel at the time. It is as though fragmaster has refused to step into the wayback machine: he can’t envision how graphics for World of Warcraft came to be. They always were.

So now I am stuck in a storage room with Goldberg and Hunt, and we all fail at being real geeks. Nice, guys.

1 thought on “YOU ARE IN A STORAGE ROOM”