There is a desire to make sense of the whatness of technology. What are we doing with it in the humanities? What should we be doing with technology in the humanities? Is what we are doing with technology dangerous? If it is dangerous, should we proceed with caution, or throw our caution to the wind and proceed with reckless abandon and do statistical analysis, generate word lists and concordances, digitally image and represent, shut up in silos, and certify authorship without let or hindrance? What are we doing and why?

It is interesting to turn to Martin Heidegger with regard to the nature of the essence of technology. Despite the fact that reading Heidegger can make anyone feel like a first rate moron, persistence will pay off. After all, you can feel like a super-mega-hella-nerd when you are able to throw around seemingly incomprehensible phrases like, “Enframing means the gathering together of that setting-upon which sets upon man, i.e., challenges him forth, to reveal the real, in the mode of ordering, as standing-reserve. Enframing means that way of revealing which holds sway in the essence of modern technology and which is itself nothing technological.” What? Just. . .What?

Let’s get down to this. Heidegger presented a few lectures on the nature of technology. Writing after the destruction of the firebombing of Dresden, the dropping of the atomic bombs on Hiroshima and Nagasaki, and the attempted cultural annihilation of Jews (and gypsies, and homosexuals, and communists, and labor union organizers, and political dissidents, and religious people of all stripes who opposed the Third Reich’s state-based religion of Nazism), Heidegger had a reason to question the essence of technology. An unapologetic Nazi sympathizer, though he did say that it was the “die größte Dummheit seines Lebens” (the biggest stupidity of his life), Heidegger saw technology put to violent uses–chemical pesticides and atomic energy used to kill humans. He also saw developments that would be more peaceable–radar, originally developed by the RAF to detect the Luftwaffe, used to track weather, and Alan Turing’s “bombe”, the machine at Bletchly Park that cracked the Enigma Code, eventually made into computers, such as the one that you’re reading this blog on. Heidegger’s entire philosophy rests on his annoyance that people don’t question enough. They don’t look into the quidditas of the world and of their perceptions. They’re hampered by philosophy. What is the essence of technology?

The essence of technology, Heidegger asserts, is to allow people to order nature, for people to uncover the already unhidden. After all, nuclear fission and fusion happen, they happen without human beings making them happen. Human beings can start a nuclear chain reaction, something that happens, thanks to physics, without human beings. All physicists have to do is put the correct things in order, order their experiments, and then, bam! The Gadget. The problem is, that human beings shouldn’t be the “standing-reserve” of technology. We shouldn’t be used by technology. Technology shouldn’t be an uncontrolled nuclear reaction. We should be able to make something of this revelation.

We need to question our techē, these activities and skills of craftsmen, to bring that technē into poiēsis. Certainly, this is difficult if we are talking about atom-splitting, but the research library at Los Alamos National Labs seems to point at this a way to approach this difficulty. Using the supercomputers available through LANL and Stanford University, researchers are able to write programs or use programs written by others, to reveal what is already present in texts that have been digitized. Research libraries like LANL’s give a place for researchers to develop programs and write code to untangle the unhidden. The problem then becomes, what do we do after we have ordered this text. Are we going to order it, as the technology allows us to do, and say that’s the end of our technē? or are we going to do something new with it?

What is already present is the text, the author, the sentiments, the plot, the words, the affect, the themes, the book, the print, the paper. What needs to be revealed is what the human being must reveal, but, as Heidegger observed, it’s unconcealed, it just needs to be detected. Here’s a good example. Karina van Dalen-Oksam presented a paper at the 2013 Digital Humanities conference about the epistolary novels of Elisabeth Wolff and Agatha Denken. She wanted to know if one author wrote some of the letters and adopted a voice for those characters, and if the other author wrote the other characters’ letters and created their voices. Basically, her research looked into authorial attribution and the formation of character voices. Using a stylometric R-script program developed by Eder and Rybicki, she inquired into technē and poiēsis. What she found out was not what she was expecting. She expected to find that one author wrote a set of characters and that the other author composed the other set of character’s letters, and voila! Instead she found that Wolff and Denken shared the labor of crafting letters for a number of different characters, except for one. And that character was Abraham Blankaart, whose letters have a distinctive style and voice, pointing to authorship by either Wolff or Denken, but not both.

Certainly, Elisabeth Wolff and Agatha Denken know who wrote which letters, but they’re long since dead, and what is unconcealed, their authorship, is hidden only because they took their secrets to the grave with them. Technology has allowed Van Dalen-Oksam to reveal the poiēsis of the novel, and she orders it, but she also reveals something in that ordering, and creates scholarship out of the ordering. 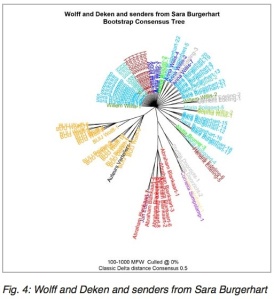 1 thought on “Poiesis and Techne”